Something for Everyone at the Non Pro Plus the Open

With the 2019 Non-Pro Plus The Open in Ardmore, Ok coming to an end, we have to reflect on what a successful show it truly has been.  Della Hillerman has done a fantastic job with the leveling system and her take on it.  There were a few twists to this format which benefitted every competitor with great purses in every level.  It is hard to figure out the best avenue to take to better the industry as a whole and trying different things is key.  This show is proof that this format is successful and we are thankful for those such as Della and other cutters that are working tirelessly to grow the sport!  There may be disagreements but the big thing is that we are all working towards the same goal.

The Non-Pro and Amateur classes closed out the show with the first of the classes being the Derby Non-Pro.  It was Christina Cox and Back Street Cat (Metallic Cat x Reycy Cowgirl) that finished with the win marking a 222 first out in the finals.  They took home a hefty $6,494.05 check to go along with their title!  This was a special win for Christina for many reasons but she just went into the finals wanting a solid run.  Even with making several finals lately she has had a little tough luck so she just wanted to have a positive experience on her new special gelding.  It certainly came together for them and she made it look easy! 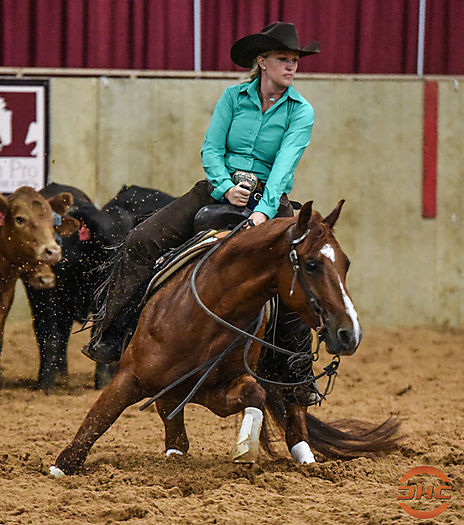 Christina Cox and Back Street Cat 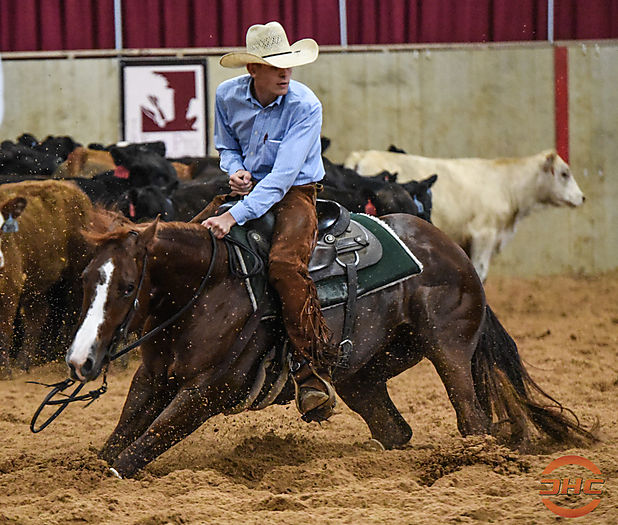 Ryan Rapp and Hows Your Memorey

Dustin Adams and Hottish For You (Hottish x Rachel Davis) marked a 216 to take home the Mid-Level Derby Non Pro Championship! Dustin is one rider that has utilized the Mid-Level revolving door.  He has been a top competitor for many years but over the past few he has been more focused on raising his kids and his family life.  Now that they are a bit older he and his wife Deena are getting to show and promote their standout stallion Hottish.  He is getting to show more this year and is eligible for the Mid-Level Non Pro classes which is perfect to get back in the groove and will then be back in the top level of the Non-Pro.  This goes to show that the format is great from this perspective as well! 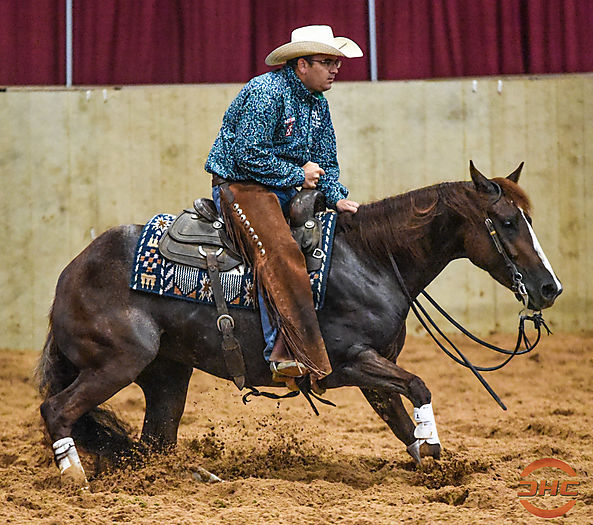 Dustin Adams and Hottish For You 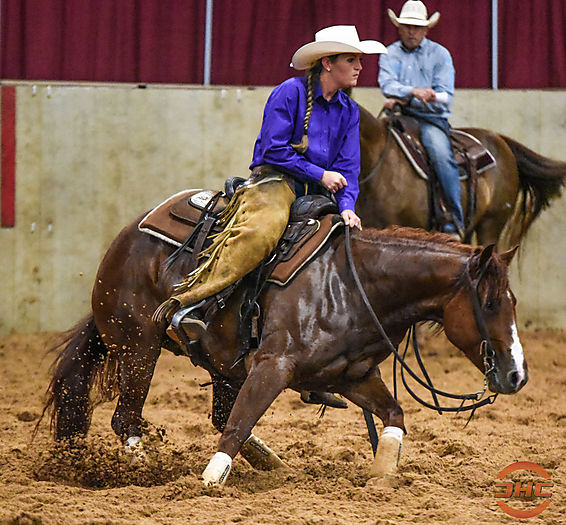 In the Limited Division It was Amy Larson and High Talkin Money (High Brow CD x Nita Talk Money), owned by Ron and Renae Callen that finished on top marking a 218 to take home a $2,743.50 check! 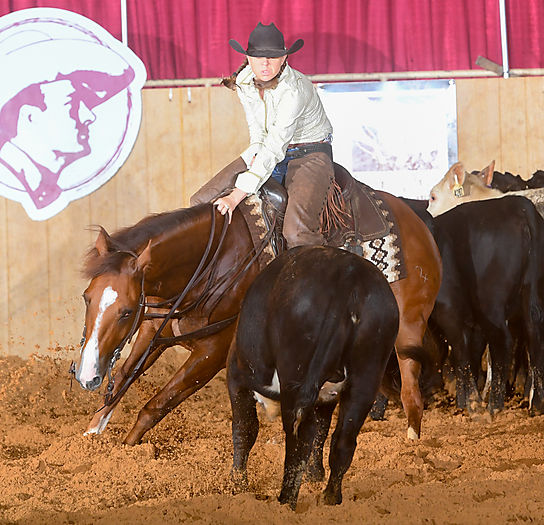 Co-Champions of the Classic Non Pro were Blake Heid riding CC Capreycious and Missy Jean Ethridge riding Rey Too Purdy (Dual Smart Rey) both marking a 222!  Both riders handled themselves very well in the tough set with Blake being first out and Missy fifth.  Missy is commonly in the Non-Pro class but Blake has only entered a few times.  This was an option for him because of the show format and it was fun to see someone who took a chance with the option and did well!  We know Missy also appreciated the format with top level still paying out very well.  Each Champion took home a nice $5,781.85 check!  Rey Too Purdy was also the Gelding Division Champion in the Classic Non-Pro adding another $955.50 to he and Missy’s earnings along with being the Novice Division Champions collecting $955.50 for this win as well. 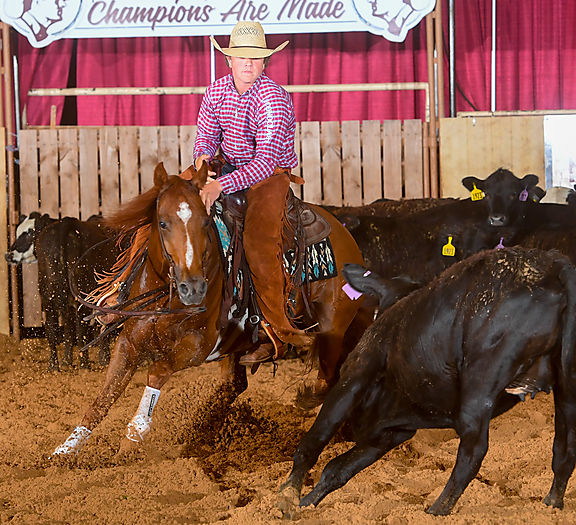 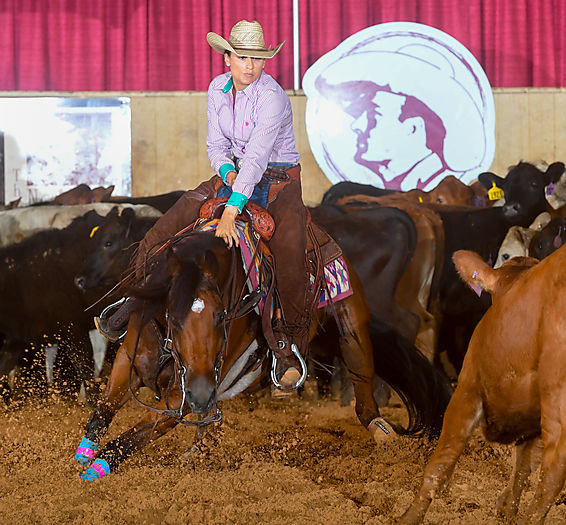 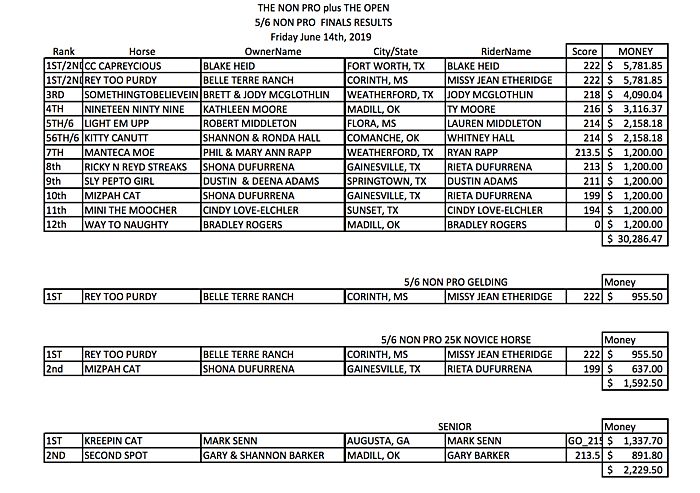 The Mid-Level Classic Non-Pro Champion was Whitney Hall marking a 221 riding Lucky Nedd Pepper (Smart Little Lena x Royal Red Pepto), owned by Shannon and Ronda Hall.  Whitney made a statement this week getting two horses to this finals and one into the Derby Mid-Level Non-Pro finals!  She collected $4,058.37 for the win!  Both classes paid well and everyone eligible for both divisions enjoyed getting the chance to make two finals. 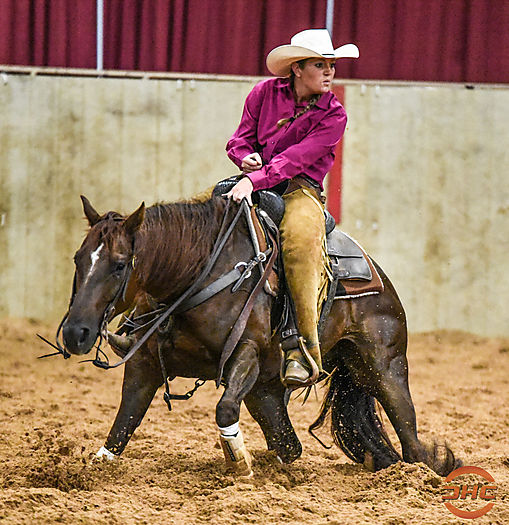 Reserve Champion was John Johnson marking a 220.5 aboard Miss Masterson (Cat T Masterson) taking home $3,364.62 to go along with their title. 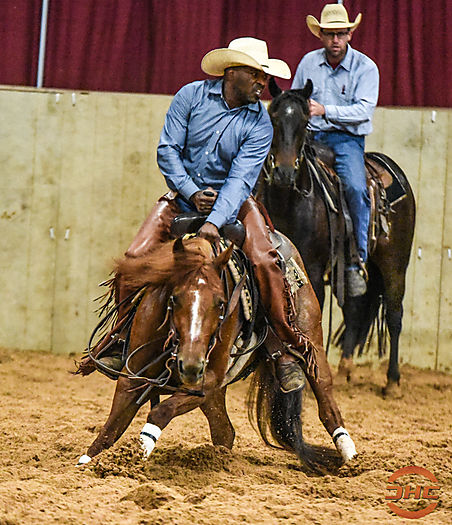 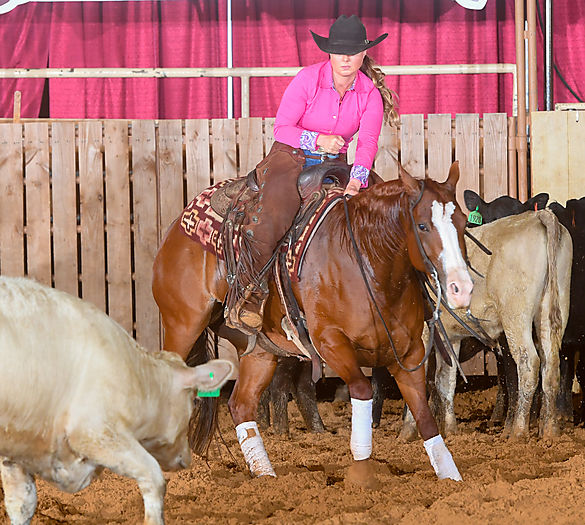 In the Amateur classes the $50,000 Derby Amateur Division started us off!  Xavier Rodriguez and One Moore Try (One Time Royalty x Reycy Cowgirl) marked a 219 to clinch the Championship and the $4,112.04 champion’s check!  This talented gelding came out of the Moore’s well-known breeding program and is making his mark like many of their horses do!  We think that this duo has a very bright future in store for them! 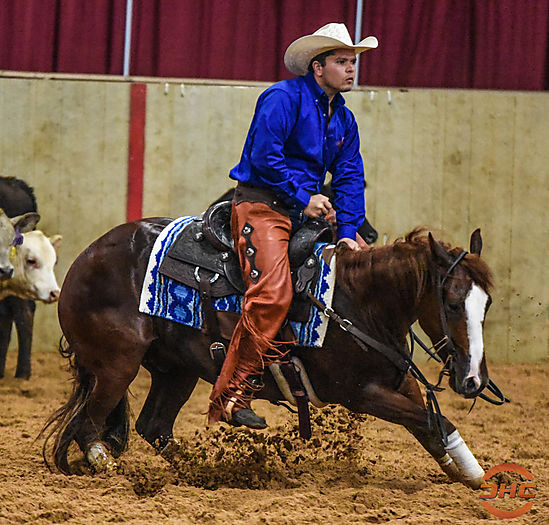 Xavier Rodriguez and One Moore Try

Reserve Champion was Grant Martin marking a 214 aboard CD Stylish Cat to collect a $3,362.53 check. 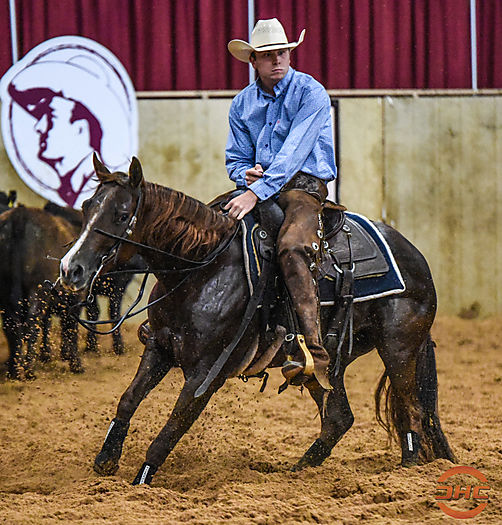 Bill Carter and Metallic Tracks (Metallic Cat x Love Tracker) marked a stellar 221 to top the $50,000 Classic Amateur and receive a nice $3,954.69 check!  Bill’s run was a fun one to watch as so many were cheering and excited for him as the run went on.  We have said it before and we will say it again, we love how encouraging all of the Amateur riders are as they watch each other.  It is what the sport is all about!  Bill was also the Senior Division Champion adding another $1,411.20 to their earnings! 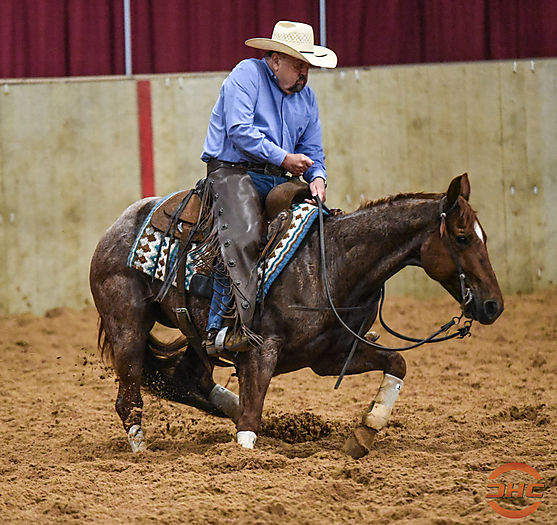 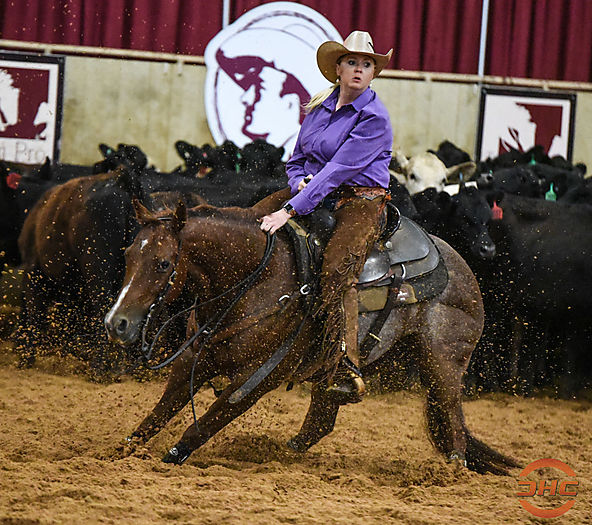 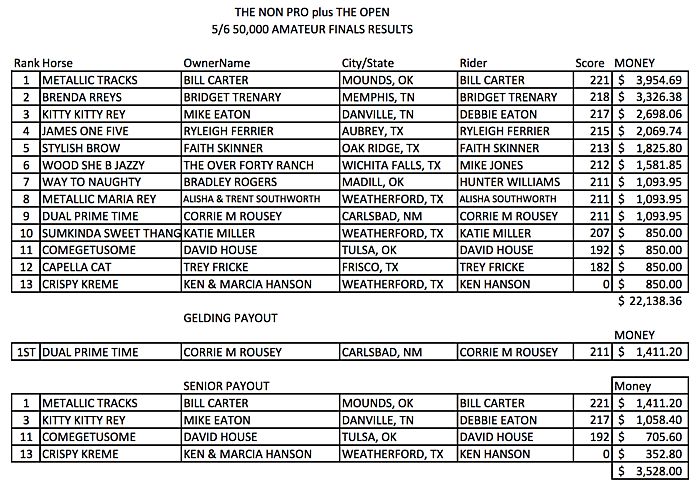 In the Derby Unlimited Amateur, it was Traci Shehady and A Groovy Kindof Love (Auspicious Cat x Biscuit Love) took home the Championship marking a 219!  They received a $5,448.39 check for the win!  Traci had a great show on this horse as well as the older half sibling, You Cant Buy Love.  She is another cutter out raising her show horses making each baby extra special.  It is a unique aspect of the sport that is for sure! 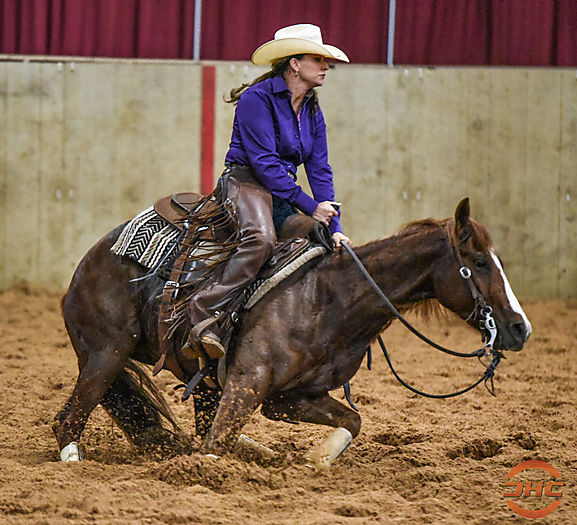 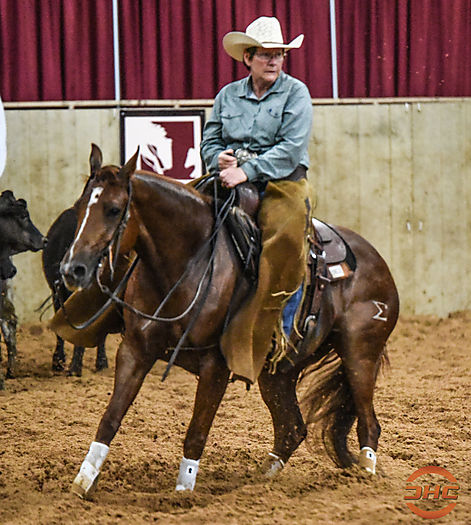 Margot Hazell and Emmy Be Tuff

The final class to go was the Classic Unlimited Amateur where Regan Plendl and Cats Lightning Rey (NRR Nat King Cole x Rey Of Oak) made their presence known marking a huge 225 to claim the Championship!  Regan always goes for the win in every finals, sometimes it works and sometimes it does not, but it is something to admire in a competitor!  This time the stars aligned and the duo laid down an incredible run.  The $5,069.64 champion’s check along with the $1,139.99 Gelding Champion’s check brought the young gelding to nearly $100,000 in lifetime earnings. 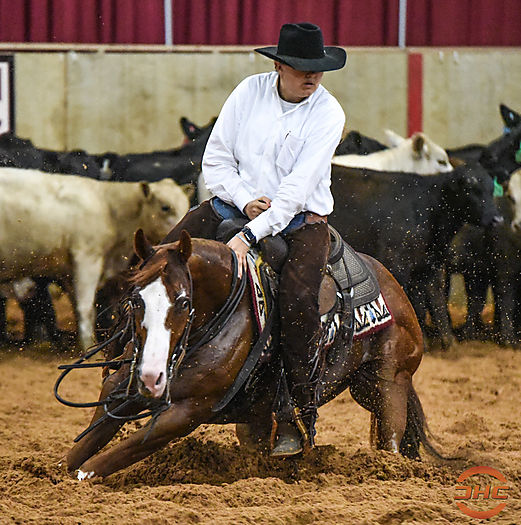 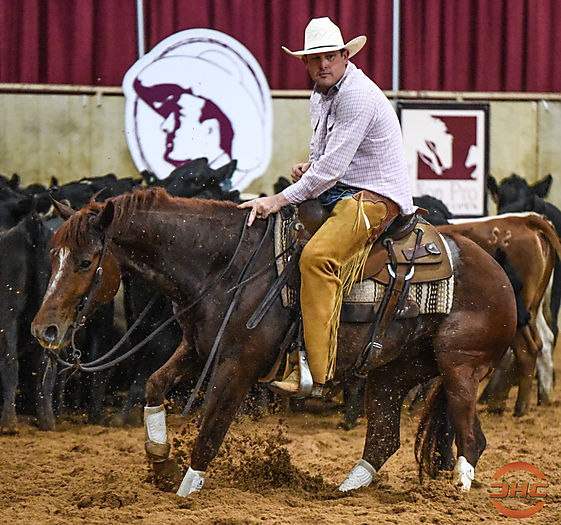 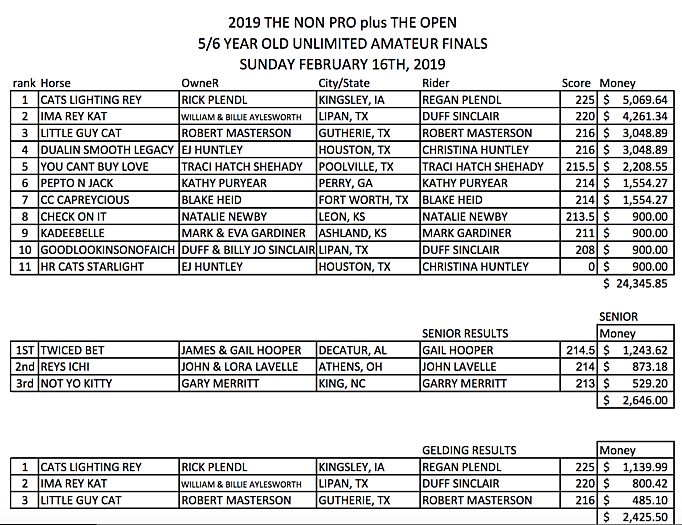 The Non-Pro Plus The Open is always a fun show with a number of weekend classes along with these aged event classes.  We want to congratulate all of the Champion’s and Reserve Champions of those classes as well and thank Della Hillerman for always having a little something for everyone at her show from year to year!  It was also fun to see so many shows going on at once this week and so many enjoying this amazing sport!