Open Results for the 2019 Idaho Futurity

All of the Open events ended with a bang and some great sets of finals here in Idaho! The crowd participation is always a big part of this show as well making it extra special to have a great run at this show.

The Classic Intermediate Open Finals was first to go, where Dylan Meyer topped the field claiming the Championship aboard Rockin KW (Rockin W x TF Smartlittle Linda), owned by Whit and Kim Davis, marking a huge 225! They received a nice $4,344.40 check for the win. 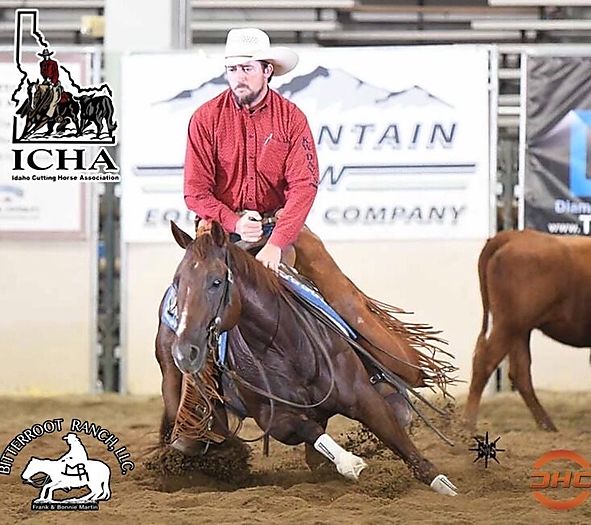 Dylan was also the Reserve Champion riding Boot Scootin (High Brow CD), owned by Ron Woodhouse, marking a 218 receiving another $3,000. It was an excellent day for Dylan and his barn! 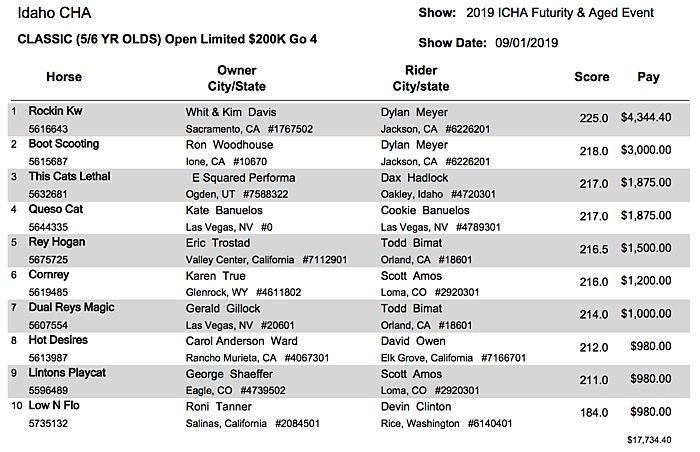 The Derby Open was next to go where the 2018 NCHA Futurity Reserve Champion Adan Banuelos and Badboonarising (Once In A Blu Boon x Show Biz Kitty), owned by Plantation Farms marked a 225 to take home the Championship and the $10,517.30 check! This duo has had a great year so far making several finals and tends to make things look easy. “Bruce” has an incredible reach making him look like he is almost floating across the pen! This is the young stallion’s first Championship and is one of the top contenders in the race for NCHA Horse of the Year. 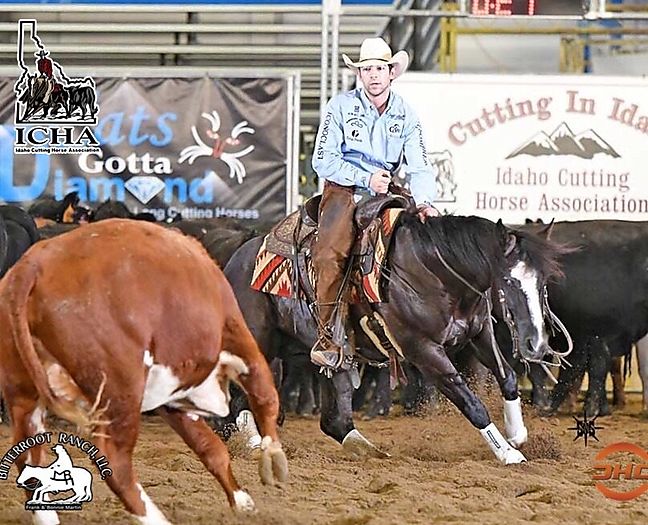 Watch the winning run below thanks to:  Kicking S Video 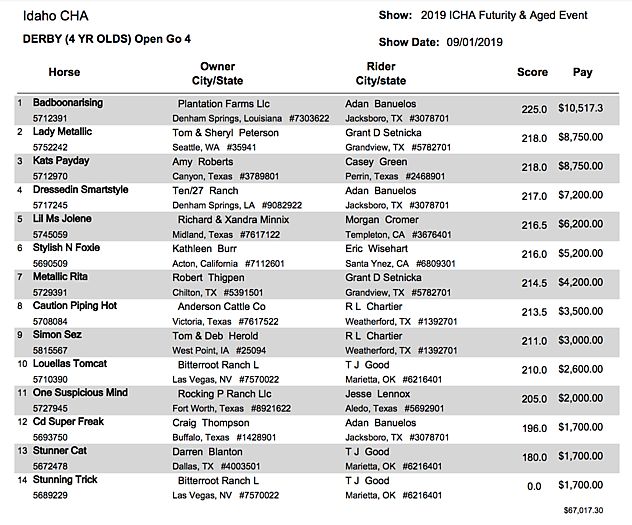 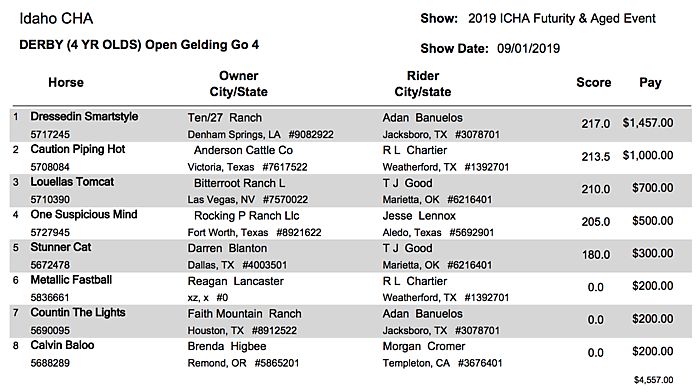 In the Classic Open it was Monty Buntin that started out the finals right marking a 225 aboard Bet N On Billi Jo (Bet Hesa Cat x Miss Hickory Hill), owned by Kimberly Irons. They were first out in the set of finals that was sure to be a great one with all of the nice horses and talented riders in the event. Monty knew he had to go for it to set the bar high! They took home a $10,043.40 check for the win to add to this mare’s already impressive career. 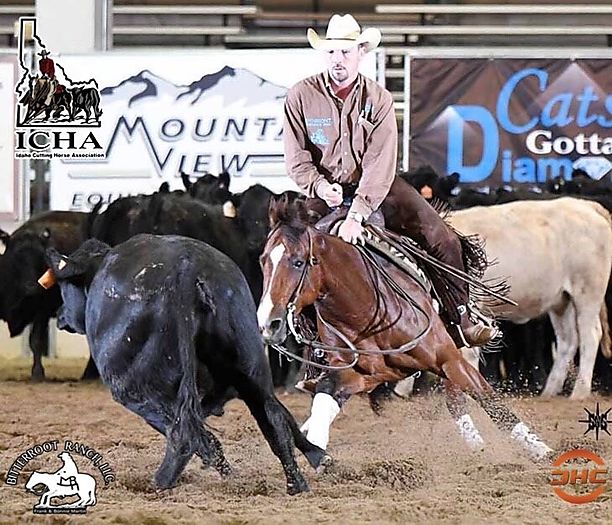 Watch the winning run below thanks to:  Kicking S Video

Reserve Champion was Tarin Rice and HR Cats Starlight (High Brow Cat x Nurse Gray), owned by EJ Huntley, marking a 219.5 to collect an $8,800 check along with another $1,176 for the Gelding Division Championship. This now six-year-old gelding has been a pretty special one for Tarin he will be one that is hard to see age out at the end of the year!

Third Place was Adan Banuelos riding Reystylin Smooth (Smooth As A Cat x Rey In Style), owned by the Ten/27 Ranch, marking a 219 to win $6,000! These two are coming off a win at the West Texas Futurity just a couple of weeks ago. 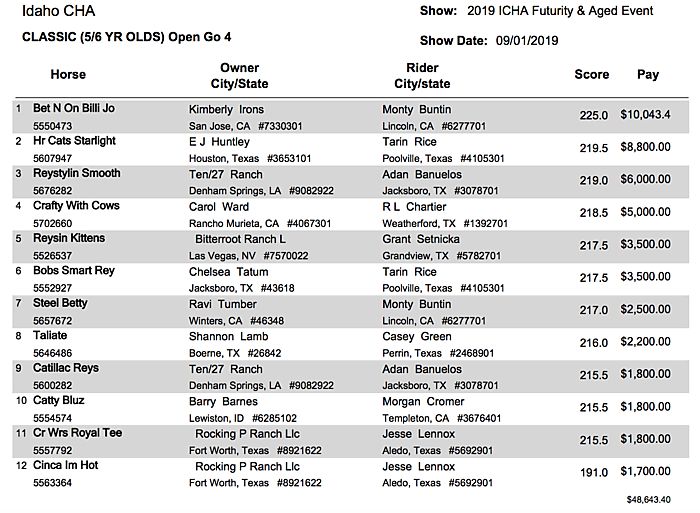 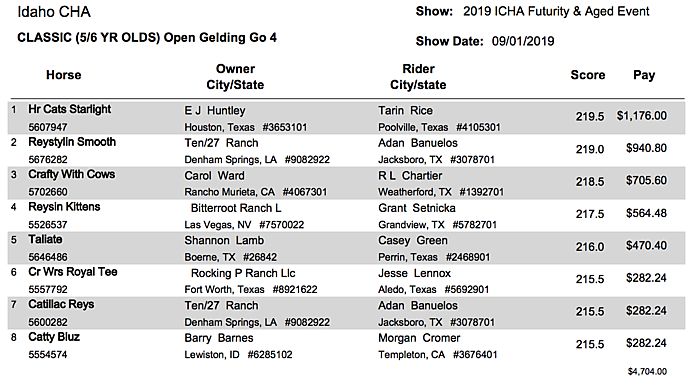 The Derby Open Intermediate finals Salvador Cabral and Secreyteriat (Sigala Rey x Starsredfeather), showed everyone how it’s done marking a 222 first out in the finals. This is the second fall run out west for these two having shown the little gelding in small futurities last year to much success. They most recently were finalists at both the NCHA Summer Spectacular and West Texas Futurity! They took home a $3,541.50 check for the win! These two were also the Gelding Division Champions adding another $834.00 to their day. 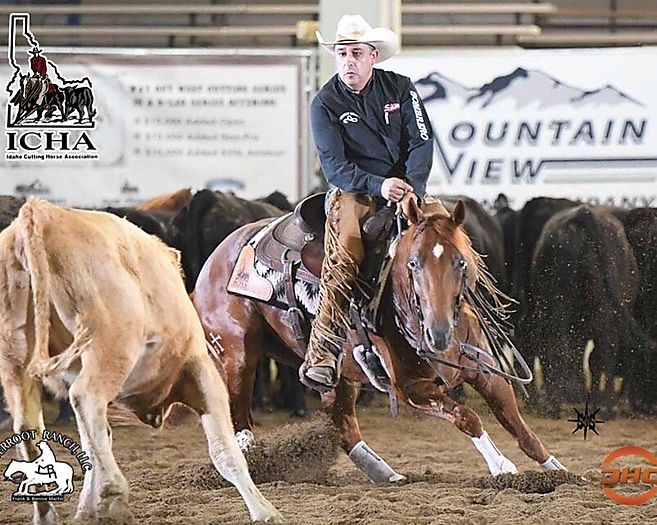 In the Futurity Open Finals Adan Banuelos finished on top again, this time aboard Armani Blue (Smooth As A Cat x Autumn Boon), owned by Jeff Neidhart. They marked a 222 first out in the two set finals which held the lead until the end! It has been a fantastic show for Adan so far that is for sure! This duo was also high up in the standings of each round. They took home a $12,002.40 check for their win! 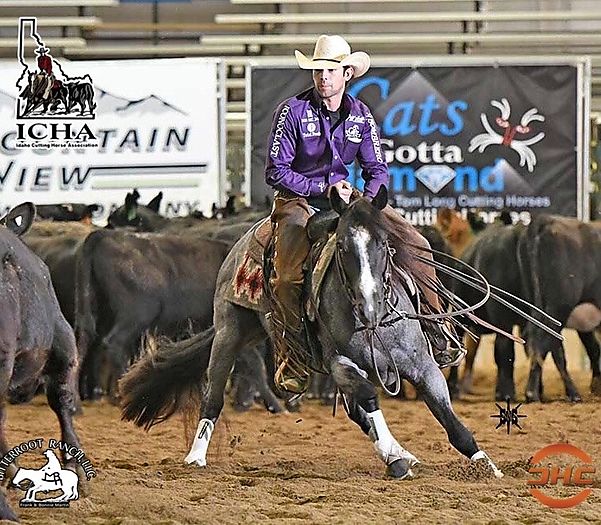 Watch the winning run below thanks to: Kicking S Video

Reserve Champion was Richard Jordan and Metallic Missy (Metallic Cat x Mereyda), owned by Bob and Sharon Haider, marking a 219. They have been putting on a show for everyone in Idaho being an instant favorite. Richard is very known for his two-year-old program, so it is exciting to see him also branching into the show scene!  They picked up a $10,000 check along with their title.

Third Place was Gary Gonsalves marking a 216 aboard Ima Gunnatrasher (Gunnatrashya x Rubyvous) receiving a $8,000 check.  They were also the Gelding Division Champions adding another $1,240 to their take home for the day. 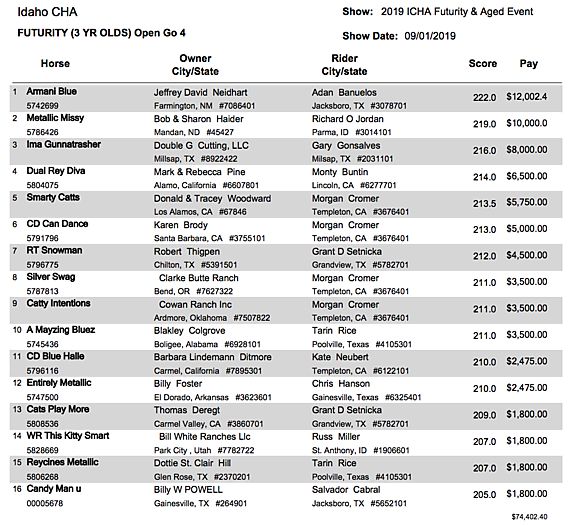 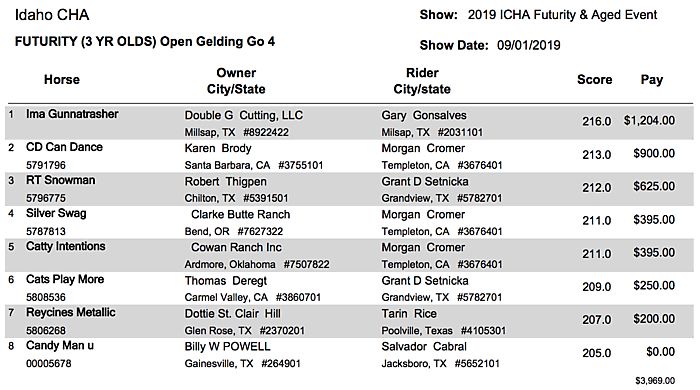 Rounding out the Open Finals was the Futurity Intermediate Open where Richard Jordan put together another big run marking a 221 riding Metallic Missy (Metallic Cat x Mereyda), owned by Bob and Sharon Haider. They added another $3,516.20 for the win to there already impressive week! As said before Richard is not one to show a lot, he is more focused on his two-year-olds, but he sure did make a statement this week with this great mare. 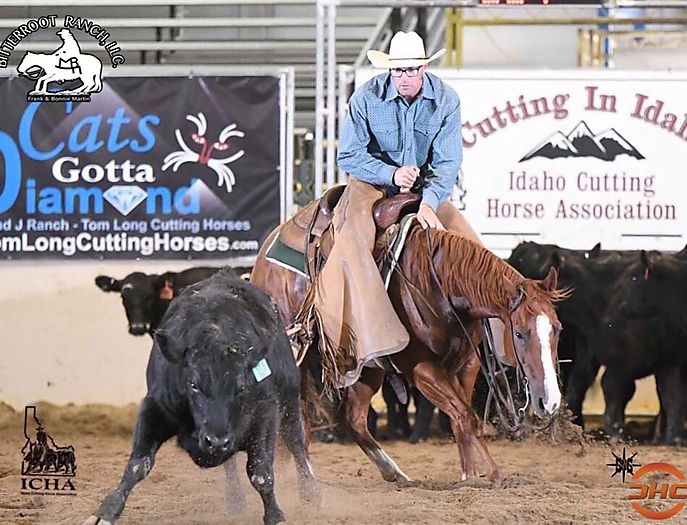 Reserve Champion was Scott Amos who has also had a fantastic show thus far. He rode Smoothe Shine (Smooth As A Cat), owned by Karen True, to a 217 to collect a $3,000 check.  This duo also claimed the Gelding Division Championship taking home another $1,011.00!

The 2019 Idaho Futurity, as always, is a fun show to attend! The beautiful weather and welcoming atmosphere are what we have come to love about this event. The Non-Pro and Amateur riders have now taken center stage, but also, the second leg of the Way-Out West Series is still left to go. Good luck to everyone as we finish out the week!