The Open Classic Finals were the first to go with thirteen of the top 5/6 year old horses and riders competing for a total purse of $76,814.

After the dust settled there were two riders atop the leaderboard both scoring a 222.5's. Grant Setnicka was the first to set the bar walking to the herd from the third hole draw on Reysin Kittens (Dual Rey x Kittens) owned by Frank & Bonnie Martin from the Bitterroot Ranch. 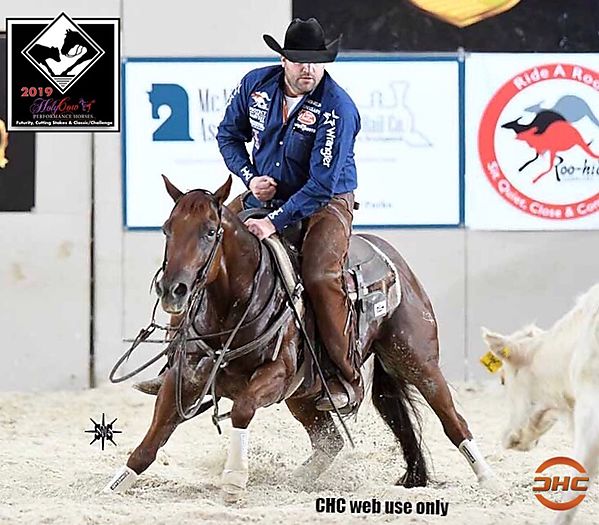 Adan Banuelos had to wait his turn working deep in the set from the 11th hole and matched Grant’s score on Metallic Mania (Metallic Cat x Purdy Aristocrat) owned by SMF Cutting Horses. 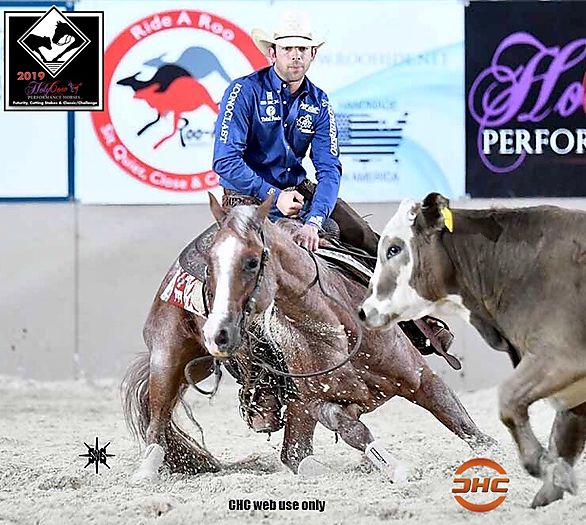 These two have been longtime friends in and out of the arena for many years and today they got to share the victory as Co-Champions each winning $11,000. The awards were decided based on the total scores added together from all three rounds and Grant narrowly beat out Adan by half a point which meant he received the Champion’s Buckle and Adan was awarded the Reserve Champion Buckle. 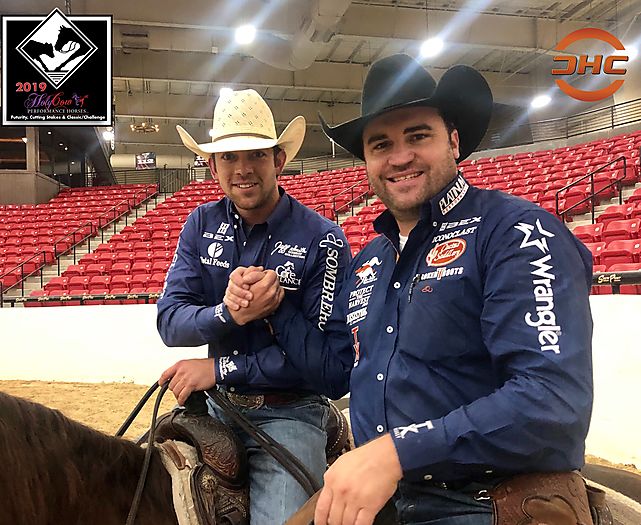 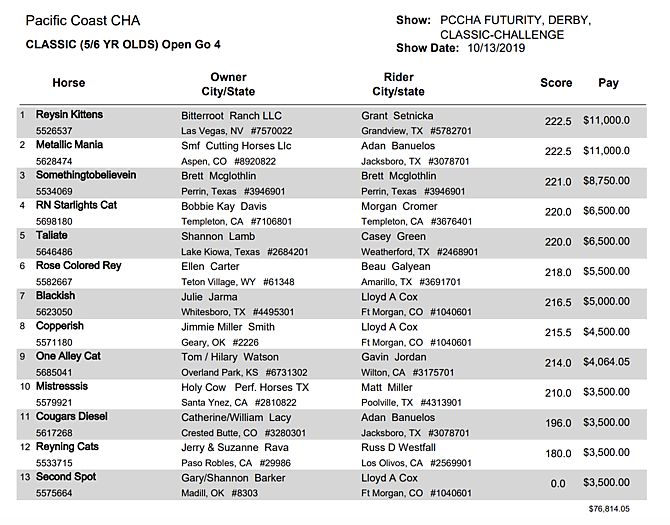 Next to go was the Open Classic Intermediate Finals and another set of Co-Champions were crowned in these finals also.

Cass Tatum worked from the 2nd hole draw aboard he and his wife Chelsea's great mare Bobs Smart Rey (Dual Rey x Bobs Smart Chance) earning a 220 score from the judges. "Selina" has been really consistent over the last few years for both Chelsea and Cass and also had success with Tarin Rice recently on his West Coast Trip. With the earnings from these finals she is approaching $200,000 in NCHA lifetime earnings. 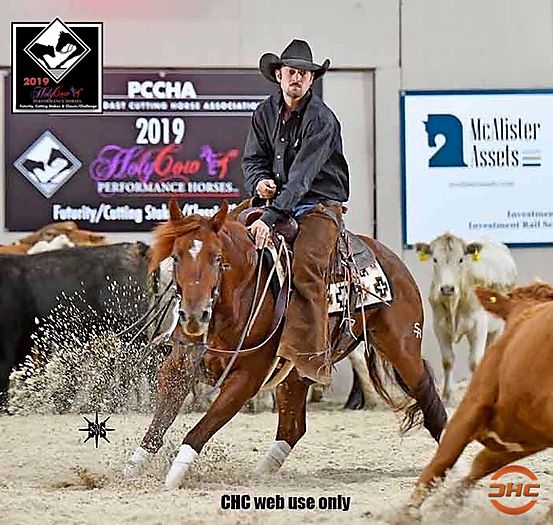 Rodrigo Taboga has also been a frequent visitor to the winners circle since he made the move from Brazil and continued his winning ways in Vegas walking to the herd right after Cass aboard Metallic Royal Mate (Metallic Cat x Royal Red Rinpoche) owned by JH Nail Ranch Inc. They also posted a 220 score which held up for the Co-Championship. Both teams collected a check for $5,337.50 for the win.

They were both crowned C-Champions and split the 1st and 2nd place checks. Rodrigo won the tie breaker for the awards based on total points which meant he received the Champion awards and Cass will receive the Reserve Champion Buckle. 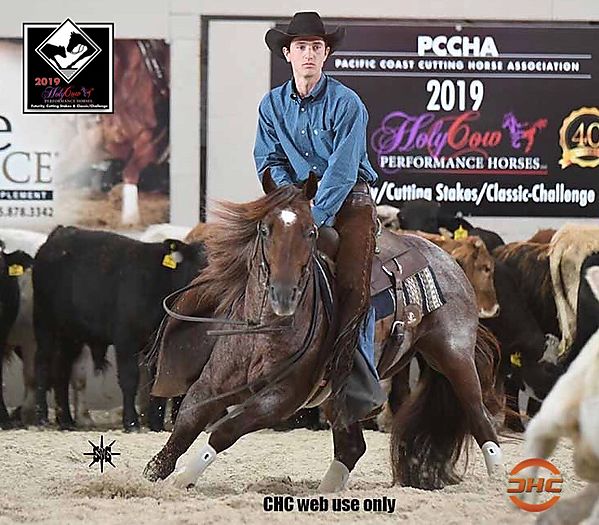 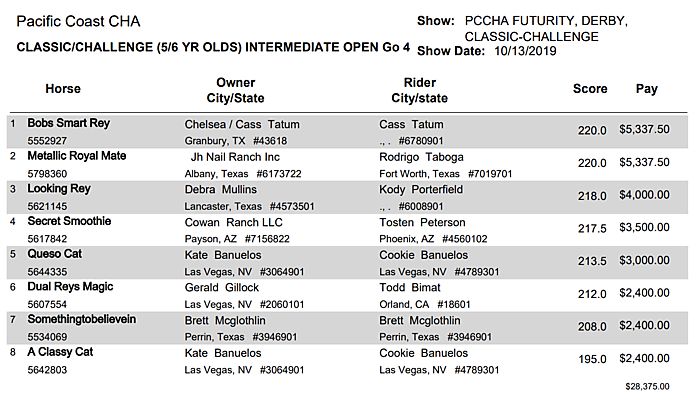 The Open Cutting Stakes Finals saw some tough runs from the challenging cows demanding the best from the four year old horses competing in the South Point Arena.

Beau Galyean proved he and his horses were up to the challenge clinching the top two spots. Beau rode Warlock (Metallic Cat x Sweet Abra) owned by Fults Ranch to a picture perfect 225 to secure the Open Championship collecting the $15,000 check and also won the Gelding division adding another $2,963.52 to this young gelding's earnings. 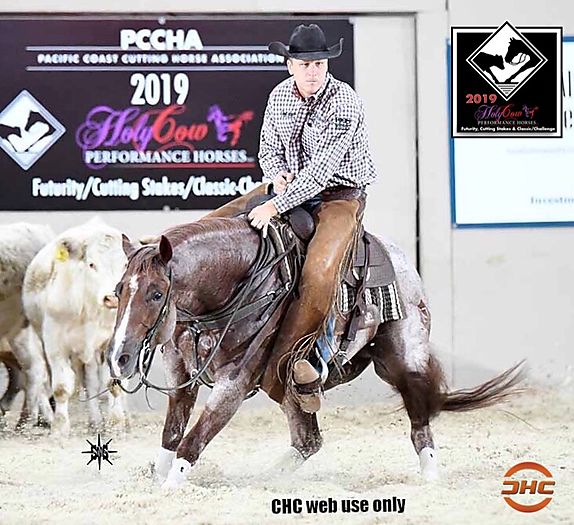 Beau also scored a 222 on Metallics MVP (Metallic Cat x My Lizzy Babe) owned by Billy Wolf collecting the $13,000 Reserve Champions check. Beau just recently took over the reins on this horse and it looks like they are figuring each other out nicely. 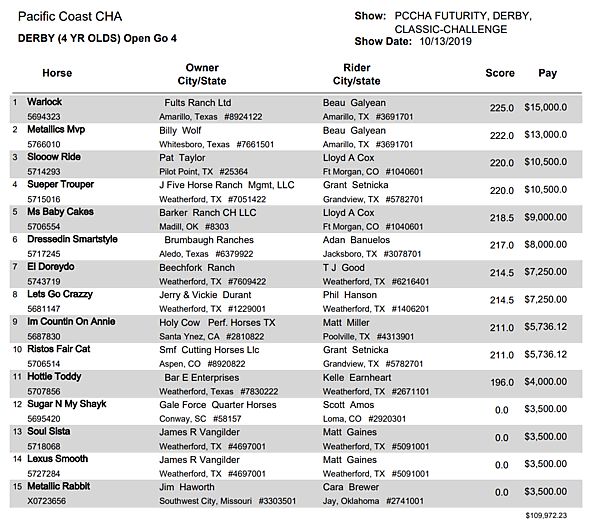 It was a great evening in Vegas for Cass Tatum who posted a 222 to capture the Open Classic Intermediate Finals Championship aboard Cocktailhrcastrophe (One Time Royalty x Miss Martini Play) owned by SDM Quarter Horses PTY. Ltd. from Weatherford, TX. This team collected the $5,000 champions check along with the awards. 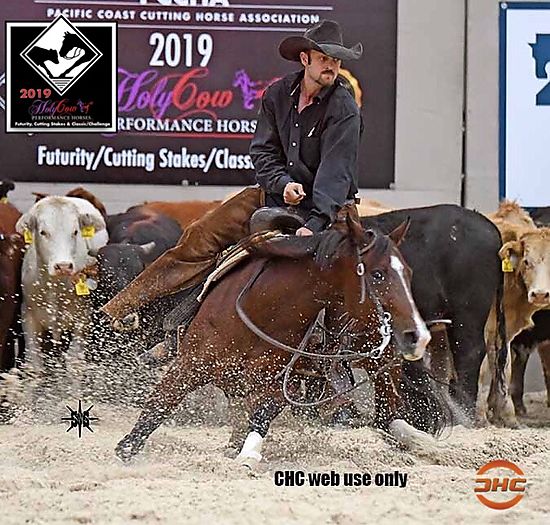 Cass was also 4th in this finals on Back Street Cat (Metallic Cat Reycy Cowgirl) owned by Lloyd & Christina Cox which paid $3,250. All told, with his Co-Champions check from the Open Classic Intermediate finals, Cass pocketed right at $13,587.50 for his efforts. 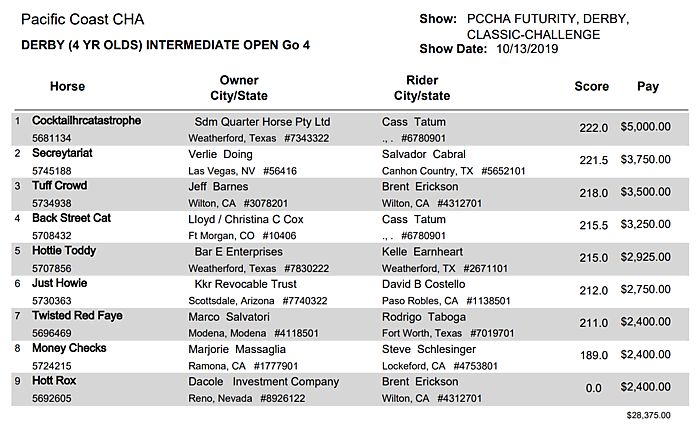 The action continues here at the South Point Casino & Equestrian Center in Las Vegas with the PCCHA Holy Cow Performance Horses Open Futurity and all the Amateur & Non Pro Divisions finishing up on October 12th.