There was an obvious buzz of excitement amid a standing room only crowd for the annual Triangle Winter Sale, held Jan. 23-25 in Oklahoma City’s State Fair Park. The crisp air and optimal timing for both buyers and sellers has historically made the sale, dubbed the “January Sale,” among the most anticipated horse sale events in the nation.

This year’s relocation from longtime sale site in Shawnee, Oklahoma, to Oklahoma City upped the energy level even more, and closed with another record-breaking net average of $8,500. The average was achieved with an impressive 88-percent sales completion on 641 catalogued horses, less withdrawals and surpassed last year’s record-breaking Winter Sale average by $300—while including 94 additional consignments.

“To have an increase in the overall average with nearly 100 more horses in the sale is remarkable,” says Jim Ware, owner of Triangle Horse Sales. “It wasn’t just one category of horses that sold good— each session sold really well. And to have completed sale numbers like we did is unheard of in this kind of consignment sale. Reaching an 88-percent sale rate is unbelievable.” 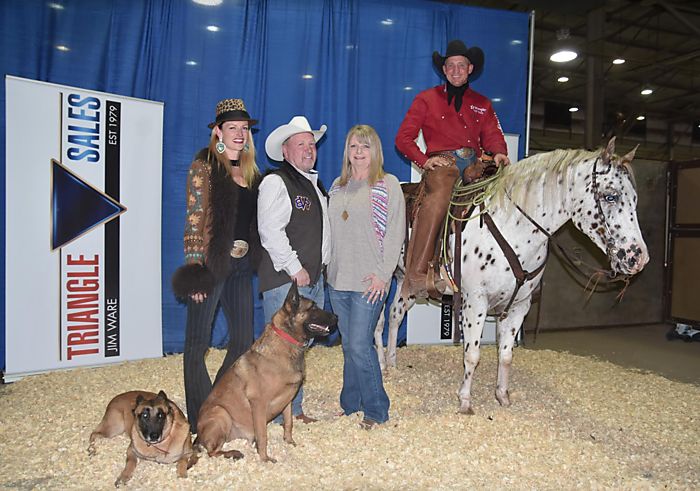 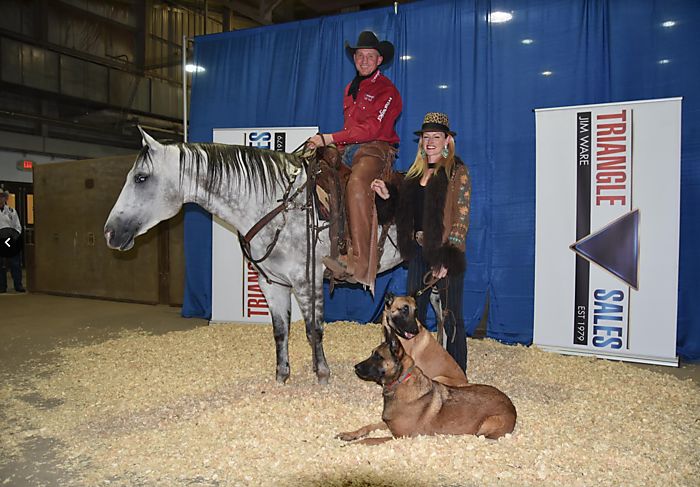 Sarah and Mozaun McKibben of Whitesboro, Texas, led the way at the 37th Triangle Winter Sale with the two high-sellers. Hip 342, OBR Going To Be A Star, a 6-year-old Pony of Americas gelding sold for $115,000 to the Shane Barrington family of Weatherford, Texas. And Hip 319, Gunners Top Jessie, a 2012 gray gelding sold for $75,000 to Autry Morlan of Bloomfield, Mo.

The three-day sale event kicked off Thursday evening, Jan. 23 with a newly introduced session named the Performance Triangle. This session featured cutting, reining and cow horse consignments that were black-type 2018 prospects and breeding stock, which averaged $9,250. The sale session included a dinner hosted by Oklahoma State Fair Park and the Oklahoma City Convention and Visitor’s Bureau as a welcome to the new location for guests that included buyers attending from three foreign countries and 33 states in the US.

At the forefront of the Winter Sale excitement was a flashy chestnut leopard pony that triggered a pre-sale flurry of interest as Hip No. 342, consigned by Mozaun and Sarah McKibben, Whitesboro, Texas. When OBR Going To Be A Star (a 6-year-old Pony of Americas gelding), affectionately known as “Skittles” entered the sale ring, all eyes were on him waiting to see the outcome.

In the end, the gavel closed on a $115,000 sale after tug-of-war bidding, with “Skittles” ultimately going to the Shane Barrington family of Weatherford, Texas. The sale made “Skittles” the sale topper and a national record sale for a family gelding.

The sale also featured exceptionally strong geldings age 3 years and older, which averaged $18,000 on the top 50 head sold, while all 115 in this category averaged $11,500. The strong top sales created a Top 10 average of $46,000 and helped advance 136 horses into Triangle’s Top $10,000 Club—the largest number from any one sale since the designation was first implemented in 2015.

Ware says the progressively strong averages the last few years have been reflective of the nation’s positive economy and escalating demand for performance horses. Since Triangle’s 2015 Winter Sale, which reached an overall average of $6,500, the Top 100 Sales average has increased drastically, reaching $19,000 for Winter Sale 2020.

“It’s a reflection of the overall economy,” Ware says. “The horse market has experienced ups and downs throughout my lifetime for different reasons, but right now we’re experiencing a good, good market. All kinds of horses are in demand and bringing top money.”

The second-high sale was achieved by a reining gelding, Hip No. 319, Gunners Top Jessie (Gunners Peppy Oak X Topsail Jessie Girl by Top Cruise) for $75,000. The gray 2012 gelding was also consigned by Mozaun and Sarah McKibben and purchased by Autry Morlan, Bloomfield, Missouri. Gunners Top Jessie led sales for reining-bred horses, which was the highest averaging discipline of the sale at $18,500 per head for National Reining Horse Association money earners and $8,800 for all categories of reiners including mares and prospects.

Another top sale was Hip No. 541, Metallic Style (Metallic Cat X Docs Stylish Legacy by Docs Stylish Oak), purchased for $42,000 by Jose Ortega, Burbank, Illinois, and sold by Rob and Sue Stevenson of Mineola, Iowa. The 2014 red roan stallion was the leading sale among cutting/cow horse bred consignments, averaging $15,050 for National Cutting Horse Association money earners and $10,050 for all categories.

The Flag Ranch dispersal finished with an impressive average of $12,700 (stallions and mares), as did the Shawnee Session at $7,250.

The Triangle Spring Sale is slated for May 1-2, 2020 at Oklahoma City’s State Fair Park. Consignments close March 20. For more information, go to www.trihorse.com.